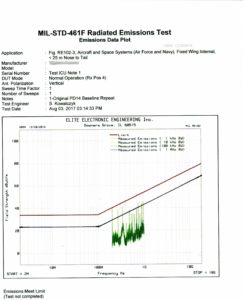 This image is of a design tested in an anechoic chamber of a 6-layer circuit board as delivered by a commercial product manufacturer that needed to be integrated into a military aircraft product. In this test the red line reflects the noise ceiling for fixed wing aircraft EMC emissions while the black line reflects the noise ceiling for rotary wing aircraft emissions.  The design was hitting the fixed wing ceiling and wouldn’t come close to qualifying for use in rotary wing aircraft. The six layers implemented in the design were a ground plane, a mixed use power plane and four signal layers. 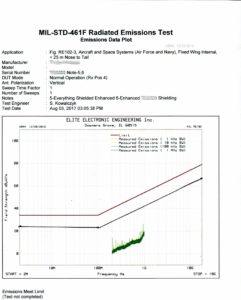 This image is of the same schematic circuit after I was asked to redesign the printed circuit board to pass EMC requirements for both fixed wing and rotary wing aircraft.  The schematic remained nearly identical*, as did the components save for one package that I switched from a SOIC to a BGA.  I raised the layer count to ten layers and implemented the board as a 1+8+1 HDI stack up.  I routed no traces on the top and bottom external layers save for via dispersion of the top and bottom mounted components.   The top and bottom layers as well as all signal layers were positioned directly adjacent to ground planes for tight coupling of ground currents on every net.  I also controlled the trace impedance.   *The only schematic change was to isolate circuit ground and chassis ground for proper isolation of signal ground currents from the enclosure’s conductive chassis. The circuit board price was higher, but the results warranted the expense.

We have experience in Aerospace, Medical and Telecom industries, including flexible and rigid-flex designs.

Please feel free to call 630-802-7873 or email us at Sales@CuLayer.com to talk about your particular circuit board needs. We are located in the greater Chicago-land area. We use Altium Designer software.